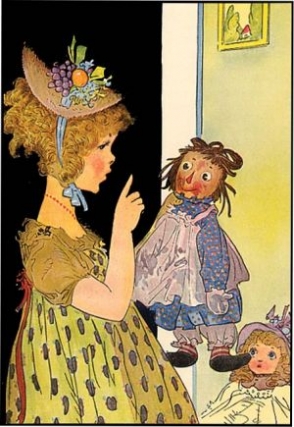 The History In Chicago, 1908, German-born Paul Frederick Volland founded the Volland Company. Originally intending to publish greeting cards that would compete with the European dominated industry, by 1917 Volland had transformed the company into a nine-acre plant that now included calendars, and books for adults and children. Through Volland's vision of publishing high-quality, mass-produced books, his books for children proved to be amongst the most successful. Although he had limited funds in the beginning, Volland was still able to employ the skills of such noted children's book authors as Elizabeth Gordon, Elizabeth Brown Kirkland, Olive Beaupre Miller, and Miriam Clark Potter. His roster of illustrators included Johnny Gruelle, Tony Sarg, Holling C. Holling, M.T. Ross, John Rae (of Howard Pyle's Brandywine School), John Gee, and Maginel Wright Enright, the sister of architect Frank Lloyd Wright.

Volland found its most profitable and beloved author/illustrator in 1916 when it published Quacky Doodles' and Danny Daddles' Book by Johnny Gruelle. In 1918, Gruelle debuted his Raggedy Ann Stories, featuring a loveable rag doll and her adventures and an empire was born. It was wildly popular and spawned a series of Raggedy Ann and Andy Stories and merchandise.

Volland's success continued, however in 1924 they merged with art calendar and greeting card manufacturer Gerlach Barklow and moved their headquarters to Joliet, Illinois. After the 1929 stock market crash quality suffered slightly as they were forced to use cheaper paper and covers in order to cut costs. By the early 30s, not even Gruelle's success could keep the company afloat and in 1934 they abandoned the book business altogether, selling the artwork for Gruelle’s books to M.A. Donohue. In 1939, the Johnny Gruelle Company acquired the plates to the nine original books in the series and continued to reprint them. Raggedy Ann books are still in print today. Volland's son Gordon published books of similar style under the Buzza Company imprint (founded in 1907 by George Buzza as the Buzza-Rheem Company).

In its 25 year history, Volland published cards and Valentines, as well as inspirational books for adults, but their shining achievements were their children's books. Included in these are the small format Sunny Books, the medium format Happy Children Books, novelty books such as Novelty Peek A Boo Books, and Cloth Art Toy Books, and the Hug Me Toy Books. Those based on more classic stories such as the Nature Children Books and the Fairy Children Books were also well received.

Because of his constant demand for high quality, illustrations were an important part of the process. While the style of the illustrations do vary, most of them seem to favor the simple, clean lines and shapes associated with the art deco style.

For the above reasons, these books are very collectible in the world of rare children's books. First editions can be difficult to tell because of the shifting and merging that went on within the Volland Company and because of the different companies that reprinted the books. This does make something of a difference in price, however, a 13th printing of a particular book has virtually the same value as the 3rd printing. The most sought after copies of these books are those in their original boxes (and with dust wrappers if they were published in them). Because these books were intended for children to read and play with, boxes were often discarded or just did not survive, and are therefore, very scarce. We always maintain a large selection of Volland titles for sale.