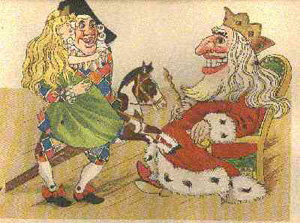 See what we currently have in stock by Meggendorfer.

What distinguished Lothar Meggendorfer's books and what has come to be regarded as his "genius" was his ability to create mechanical books with intricate and realistic movements that had both humor or grace. Most of his mechanicals are tab operated with as many as 6 hinged pieces moving simultaneously; some are slatted mechanisms whereby the upper illustration magically "dissolves" to reveal a new and related illustration. Some have revolving discs and one has a three dimensional head exposed through a hole in the pages. The most fabulous and elaborate books are his Internationaler Circus and Das Puppenhaus (The Doll's House). These ingenious pop out panoramas deceptively present themselves as simple book size objects when closed, only to become astonishing multi dimensional detailed fold out panoramas.

Because he was so successful in his own lifetime, the demand for his books was great. Many of Meggendorfer's books went into to several printings and were published in England, France, Italy, Spain, Russia and even a few in the United States. In addition, it was not uncommon to find the same mechanical illustration used in different books. Despite the large numbers of books produced, it is not easy to find collectible, working copies of Meggendorfer's books and they are amongst the most sought after by collectors. Although they were well made, as might be expected, little hands did their damage over the years. In his book Always Jolly, Meggendorfer himself inserted this caution to children:

With this book, my own dear child,
Are Various pictures gay,
Their limbs they move with gestures wild,
As with them you do play.
But still they are of paper made,
And therefore, I advise,
That care and caution should be paid,
Lest woe and grief arise;
Both you and pictures then would cry
To see what harm is done,
And sigh would follow after sigh
Because you've spoilt your fun.

Here is a list of Meggendorfer titles we have in stock or have sold in the past, listed alphabetically by title: